All Collections
Clearview Social Knowledge Base
FAQ
What Is SocialScore™, and How Is It Calculated?

What Is SocialScore™, and How Is It Calculated?

Learn about Clearview's dedicated metric for ranking the strength of shares and how it coaches users to understand best practices.

Written by Ethan Dayton
Updated over a week ago

SocialScore™ is a custom metric developed by Clearview Social, backed by continuously updating data, that grades the strength of social media shares and offers gentle, constructive feedback to users on how their shares could be improved.

How Do I See SocialScore™?

You'll see SocialScore™ in two places in Clearview Social. The first is on the Leaderboard.

The other place you'll see SocialScore is when sharing an article. Based on a dozen intelligently calculated factors using real data, our algorithm will "predict" the SocialScore of your Share and offer one way it might be improved. 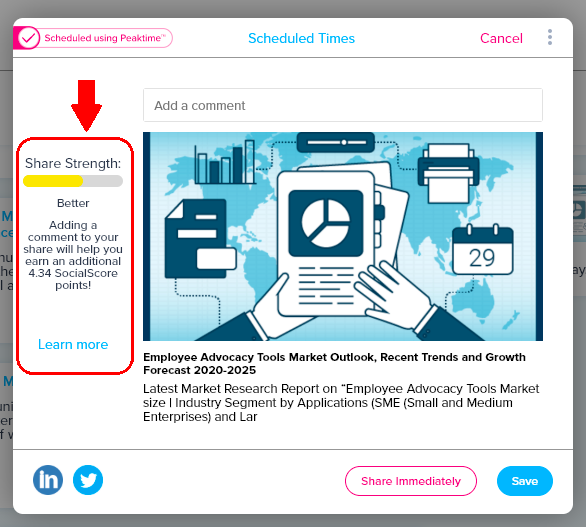 What Does A SocialScore™ Value Represent?

SocialScore™ is an ever-evolving algorithm, backed by 100% pure evidential data, that predicts the statistically-likely number of clicks your Share will receive if it goes out as it currently looks. When the SocialScore™ algorithm says your share appears to have a value of, for example, 13, it is saying "Across our system, shares that shared traits with your Share, such as what platforms it's being shared to and when it is shared and what it looks like, received an average of 13 clicks". Then, when it advises an improvement, such as "Adding a custom Comment to your Share would increase its SocialScore™ by 6", that is an evidence-backed assertion based on statistically-significant data that is looking at shares similar to yours and finding that a custom comment makes a 6-click difference.

Some of the characteristics of a Share that are evaluated by SocialScore™ include:

How can I increase my SocialScore™ on each post?

If you follow the prompts mentioned above, you'll see your SocialScore™ rise immensely! However, here's a few quick tips to get you started:

** If you don't have a Twitter or Facebook profile, check with your Admins first to see if it's you've been approved to share company and related content to other platforms other than LinkedIn
*** Using multiple hashtags will not increase your score
****Please check with your Admins to verify if this is allowed in your organization

This list will constantly be growing, so check back often to see what else SocialScore™ will take into account as time goes on!

We have prepared a video covering this topic here:

If there is anything else we can assist you with, you can contact Clearview Social Support either by emailing support@clearviewsocial.com or through the Intercom chat button in the bottom right of the site.

Did this answer your question?